Home » About the Area

Huntley is a rapidly growing village in McHenry and Kane Counties, Illinois. In 2008, the U.S. Census Bureau estimated the village’s population to be 22,923.[2] As of the 2000 Census,[3] the village had a mere 5,730 people, meaning the village’s population has more than tripled in eight years. Huntley has adopted a very aggressive development strategy that would fit more into place in the Sunbelt rather than in an outer suburb of Chicago. Currently, the village has 14.10 sq mi (36.5 km2), 14.07 of which is land.

Huntley is best known for its Prime Outlets mall and Sun City retirement community, the largest in the Midwest. The old part of Huntley is also known for its public square which features a gazebo, as well as a full brick-paved street (Woodstock St.) and 50s-style diner, The Huntley Dairy Mart. The village’s slogan is “The Friendly Village with Country Charm.”

The village is served entirely by Consolidated School District 158. Originally headquartered in Huntley, the administration offices have since moved to a new campus in Algonquin.

Only one campus is within village limits. The Harmony Road Campus in the western part of the village contains Huntley High School and Leggee Elementary School. The other two campuses, which serve parts of Huntley are located in nearby Algonquin and Lake in the Hills.

The Huntley Area Public Library District includes all of Huntley, parts of Lake in the Hills and Algonquin, and portions of Grafton, Rutland and Coral Townships.

The Huntley Area Public Library district serves all of Huntley as well as portions of Lake in the Hills and Algonquin. The library used to be housed in a very small 1,000 or 2,000 sqft (190 m2) building at Algonquin Road and Church Street. As the area’s population exploded in the 1990s and 2000s, new facilities were needed.

In 1999, the former building was closed and a new 15,000 sqft (1,400 m2) building constructed on Ruth Road, just north of East Main Street. The building was architecturally designed with both the rural character and fast-paced growth of the community in mind, as it features country-style architecture, yet is designed so that additions to the building can be made. Since then, the library has doubled the amount of its materials and services several times over, to serve the needs of the growing community.

Over 23,000 patrons within the Huntley Area Public Library District have library cards. Circulation figures for the district are currently over 468,000+ per year and the library’s collection exceeds 100,000 pieces. This rapid growth rate and the need for more materials and space for programs has forced the district to start looking at plans to expand the current building. The library district has tried once unsuccessfully to get a referendum passed in 2005 to expand the building and its services. In September 2006, the library underwent a remodeling project to reorganize the collection, which resulted in the loss of the library’s public meeting and program room. The library is currently holding programs outside of the library. The library board voted not to try for a referendum in 2007. The Friends of the Huntley Area Public Library have set up a fund through the McHenry County Foundation to help raise money for the library expansion. In February 2008 the board announced that it would add a Referendum question to the November 2008 ballot. The 2008 Referendum also failed and the library is currently looking for other ways to expand.

Most village recreational services are under authority of the Huntley Park District, which serves Huntley and portions of neighboring communities.

Huntley used to be a small town, yet has sprawled out in recent years and gained many new subdivisions. However, there are also distinct neighborhoods built before then which form the core of the old part of Huntley. Both subdivisions and neighborhoods are listed below:

Del Webb developed Sun City Huntley in the village, the largest age-restricted community outside of the Sunbelt

The village has a pretty sizable and growing retail base, offering primarily neighborhood convenience retailers, but is also becoming a significant regional retail area.

The Huntley Outlet Mall is a regional outlet mall located north of I-90, at the southeast corner of Illinois Route 47 and Freeman Road. Built in 1994 under the original name “Huntley Factory Shops”, it contains primarily brand name clothing and home accessory stores. There are about 50 stores total. An outdoor mall, the mall features lush landscaping, brick walkways, and over-hangs that shield shoppers from the elements. There is also an indoor food court serving as the centerpiece, with a fountain in front and a children’s playground in the rear. In the early 2000s, the mall appeared to decline, but has resurrected since the mid 2000s, thanks to a rapidly growing residential base to serve, combined with a makeover, that included new additions to the tenant roster. Niko’s Restaurant is located across from the mall on Freeman Road. The Huntley Automall is located in front of Prime Outlets, fronting Route 47, and features Tom Peck Ford and a General RV dealership.

Downtown Huntley and other retail areas

Huntley’s downtown area, along Main Street, just east of Route 47, includes several shops, restaurants, and bars, centered on Jim Dhamer Square and the village’s signature gazebo. Downtown restaurants and/or bars include Luigi’s Pizza, The Village Inn, Parkside Pub, and Offie’s Tap. Strode’s Colonial Furniture serves as an anchor for the area. There are also several churches in downtown, in addition to the Post Office, the original fire station, and the American Legion Hall. A small neighborhood center, located southeast of downtown Huntley at the intersection of Huntley-Dundee and Haligus Roads, includes small shops, Snap Fitness, and Higher Grounds coffee shop.

The village is a haven for industrial businesses, as it is located along the high truck-traffic corridors of Illinois Route 47 and I-90 and a branch of the Chicago & Northwest rail line, and also maintains comparably low taxes, wide open spaces, and equal proximity to Chicago, Rockford, and Wisconsin.

Large businesses present in Huntley include a Weber Grill factory, a Dean Foods dairy processing and distribution center, Freund International trucking center, Allied Asphalt paving company, and Union Special, an industrial sewing equipment factory. Huntley used to be home to several agribusinesses, such as Marlowe Feed and FS, but as the area has grown and developed, these businesses are no longer in operation.

Huntley also has two industrial business parks, one at the intersection of East Main Street and Ruth Road, and another along Kreutzer Road at Smith Road. Several companies have facilities in these areas. 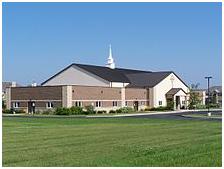 The village has been served for many years, by three churches all located in downtown:

As the Village has grown in the 1990s and 2000s, additional churches have sprouted. They include: